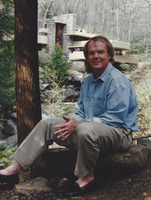 Christian A. Weber Jr, 78 of Ventura, California passed away February 28th in Buffalo, NY where he lived close to his son for the last 6 months. Born and raised in Reading, Pennsylvania Mr. Weber was a 1959 graduate of Muhlenberg High School where he was inducted into their athletic hall of fame in 2014 as a standout football and track athlete. He graduated in 1964 from Penn State University, where he played football under coach Rip Engle, participated in the 1961 and 1962 Gator Bowls, and remained an active member of the Penn State Letterman's club. A member of the American Institute of Architects, Mr. Weber steered a successful Architectural firm in Berks County for many years, The Weber Group. Later in life, he continued his passion for designing and building beautiful homes in the mountains of Colorado where he lived for 10 years. Upon his retirement, he moved to Ventura, CA in 2011. Mr. Weber is survived by his longtime companion of 20 years, Linda Citro of Ventura, CA, son Christian Britt (Susan) Weber of Orchard Park, NY, daughter, Chanin Ashley Weber, twin granddaughters Anna and Alexandra Weber of Pittsburgh, PA, and his former wife, Louise "Bunny" Weber of Palm Springs, CA. He is predeceased by his father and mother, Christian Allen Weber, Sr and Bernice (Brown) Weber and brother, Cary Weber. No prior visitation, services will be held privately at a future date at the request of the family.