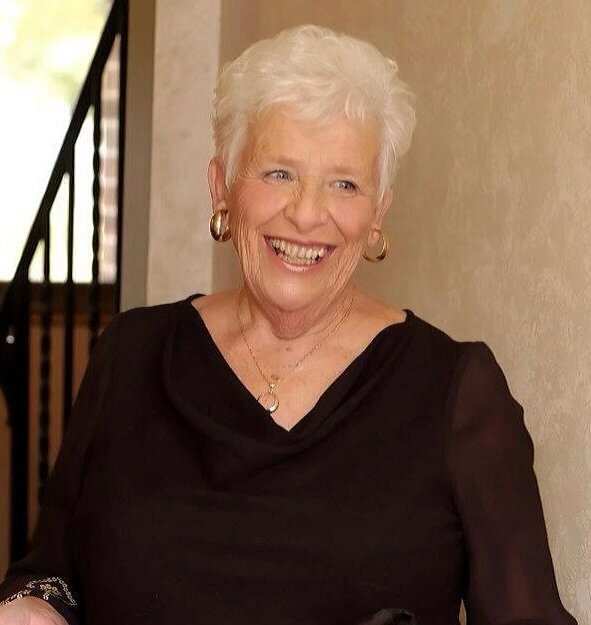 Please share a memory of Mary Jane to include in a keepsake book for family and friends.
View Tribute Book
Mary Jane (Ueblacker) Guyette passed away on October 31, 2022 in her Orchard Park home at the age of 86. Born to the late Robert and Pearl (Ries) Ueblacker in South Buffalo on January 8, 1936, Mary Jane was the younger sister of the late Sharon (Ueblacker) Brown. Mary Jane was preceded in death by her husband Richard “Dick” Guyette. She is survived by William (Pamela) Guyette of Montgomery, AL; Mary Ann (Len) Przewozny of West Seneca, NY; Karen (Alan) Troidl of Endwell, NY; and John (Mia) Guyette of Florida, NY; 9 grandchildren and 14 great grandchildren; sister in law Joan (Guyette) Schwenk; several cousins, nieces, and nephews; and special companion Robert Jagodzinski. Mary Jane attended St. John the Evangelist and St. John’s Parkside in South Buffalo. She was a 1953 graduate of Mount Mercy Academy in Buffalo where she established lifelong friendships with her Tri Phi Sorority sisters. Legend has it, one summer day in 1952 at Evans Beach, a ball rolled onto Mary Jane’s beach blanket and her life was forever changed. She met the love of her life Richard, “that cute boy from North Buffalo.” Stationed in Okinawa during the Korean War, Richard courted Mary Jane through handwritten letters for two years. They were married on January 22, 1955 and the two of them spent the next 51 years dancing and making a lifetime of memories. In adulthood, Mary Jane built her life around her four most important priorities: Family, Community, Friendship, and Faith. FAMILY. As a child, visiting the clan - grandparents, aunts, uncles, and cousins - either on Sycamore and Ash or Pine Street - were cherished childhood memories. It was there Mary Jane learned the secret recipe for Grandpa Ries’ sugar cookies and the art of playing Fan Tan and Scat. A few of her favorite childhood haunts were the swimming pool and skating rink in Cazenovia Park, the Comet at Crystal Beach, roller skating and playing hopscotch on Maywood Place, and getting chocolate ice cream at Kaffasi’s “Honeyland”. Mary Jane was a devoted wife and mother of four children. Nothing was more important to her than family. After a couple moves, the family settled into one of the first houses on Sibley Drive in 1967 and for the next 40 years, Mary Jane was front and center for family gatherings, holiday dinners, graduations, first communions, sporting events, music recitals, weddings, Easter vacations, Alleghany weekends, and so much more. Self-titled the “Minister of Domestic Affairs”, Mary Jane set the bar high for creating a loving home and keeping the home fires burning. She was always heard saying: “I tried to make it good.” "Did you do your best today?" “Love you forever.” "Happy faces in the morning.' COMMUNITY. Whether organizing the Sibley Drive newspaper and block parties, volunteering at Roswell Park Cancer Center and Counting Angels, leading First Holy Communion classes and Sibley Women's Bible Study, or facilitating the Over 55 Travel group, Mary Jane was a fixture in the community. She was passionate about bringing people together. FRIENDSHIP. Mary Jane counted every friend a blessing - Bridge Club, Wolves Book Club, Bible Study, Bowling, Bocci, Golf - she was wholeheartedly there for those in her life. To Mary Jane a stranger was just a friend she hadn't met yet. She was known to learn the entire life story of a "new friend" in less than 15 minutes. FAITH. Mary Jane believed God was her life source, and her trust in Him was unconditional. Her faith in God was her anchor and factored into all decisions. Mary Jane also believed that God's grace allowed her to be surrounded by wonderful people that helped shape the direction of her life. She was an original member of St. Catherine’s of Sienna Parish, active in Cursillo, co-founder of the Koinonia movement, Eucharistic Minister, St. Gerard's Bishop's Committee, and frequent visitor of Mount Saviour Monastery in Pine City, NY. Through the years, Mary Jane enjoyed traveling (favorites: Canadian Rockies, US National Parks, Gulf Shores AL), being "Gram" and "GG" to her grandchildren and great grandchildren, and making friends wherever she went. She found great purpose sharing in the successes, joys, and challenges of those around her. An enthusiastic fan of the Buffalo Bills, Mary Jane could often be found cheering the games on TV. Friends and family can share memories and condolences Monday, December 26 from 5:00 - 8:00 pm at James W. Cannan Funeral Home, 3155 Orchard Park Road. A Mass of Christian burial will be held on Tuesday, December 27 at 10:00 am at St. John Vianney Roman Catholic Church, 2950 Southwestern Blvd, Orchard Park, NY.
To send flowers to the family or plant a tree in memory of Mary Jane Guyette , please visit Tribute Store
Monday
26
December